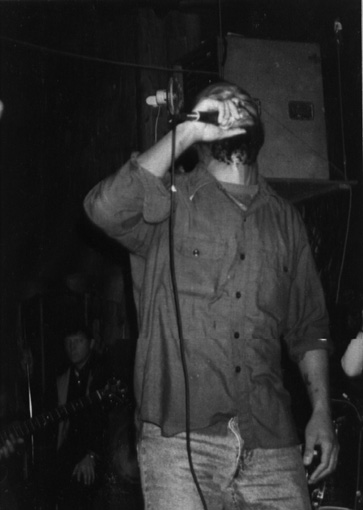 Can everyone say their names and what they do in the band?

Jason:  And Dave, he’ll be in here in a minute, he plays bass.

Had you played any other shows on the tour before tonight?

Alex:  Actually, it’s not a tour; we’re doing about four shows with Texas and Promise Ring.

Alex:  Rocket Science played at all of those shows last week, except for Richmond.

What’s been your impressions of the shows that you’ve played with these bands so far?

Jason:  We hadn’t really played in a while; Bluetip just went on a long tour, so we just got back into it.  It takes a little while to get used to it, but by the second show, it was a blast.  We got to play our hometown to a lot of people, and that was really cool.

Alex:  It takes a little getting used to getting interviewed by people-(laughs)

Shawn:  Getting interviewed by people and playing. I mean, things are a little bit different.  I haven’t played…I played with the Downer Boys, a band from Maryland, for a while.

Alex:  That was more of a combination bicycle and rock band, too, I seem to recall.

Jason:  What are you guys talking about?

Alex:  Exercise rock, is that what it was?

Shawn:  No.  It wasn’t exercise rock.

Jason:  It was psycho shit.

Shawn:  No…it was crazy psycho shit, but it was-

Alex:  Let’s just say that the Downer Boys knew how to take the stage-

Alex:  They knew how to take the stage!

Jason:  We all used to play together in a band before this, too-we broke up in ‘90-it was a band called Swiz.  We haven’t played together, with each other, since then.

Jason:  We’d always been talking about-

Shawn:  Basically, we’d kept in touch over the years, and I think that we were all, at the same time-

Jason:  Excited to do stuff

Shawn:  More or less, to a certain degree, started to get the urge to play together again.

Jason:  And then we decided to do this band, Sweetbelly Freakdown.

Dave Stern:  Well, it was really because you guys were waiting four, four and a half years for me to come back from California..

Dave:  And you were afraid to do any music without me there.

Alex:  I think that the way Swiz broke up ended a period in all of our lives.  Breaking up was mostly about that period of out lives, and not about how we interacted as individuals.  It was through that lens of being twenty-two or so, twenty-three, and it’s good to be back with the same people several years later, just to touch base again.  We’ve all kept in touch…I like to think of it as something that’s always kept going on.  There wasn’t one day where we just said “let’s do this again”.  It’s always been in the back of our minds.

Jason:  We talked about it for a year.

Jason:  It’s all described on the record.  It’ll be disclosed at a later date.

(Right here,  Garrett from Texas is the Reason walked over to where the band was being interviewed)

Garrett:  I don’t mean to interrupt.

Jason:  You know, in this interview, it’s going to say “At this point, Garrett from texas is the reason appeared”….(laughs)

(Editor’s note: Garrett talked briefly to the guys in the band, and then left.)

Garrett:  You guys were awesome.

What did you guys do between being in Swiz and now?  I know that Dave and Jason are in Bluetip…

Jason:  Bluetip started two years ago.  Musically…well, Dave can tell you about that.  Mostly, I had been doing graphics myself since Swiz broke up.  I had started playing around with some people, and then Blue Tip with Dave was the first thing that stuck.  Dave had been playing in California…

Dave:  I was living in Los Angeles for four years, just playing music with some guys out there in a band called Bluebird, and working in the film industry.  I finally moved back here, and as soon as I moved back, we started practicing, and three months after, blue tip went on tour.

Shawn:  I was basically just freaking out, being a jerk, trying to figure out what was going on in my head.  Working in bicycle shops, doing some bike racing…courier work, fucking around with living in the woods, studying survival, stuff like that.  Alex, what had you been doing?

Alex:  Severin.  I was playing in a band called Severin and working in the publishing industry.

What would you say motivates your lyrics?

Dave:  Would you say that that would be the four cardinal rules of punk rock?

What have people thought of you guys, seeing you play?

Dave:  It’s weird.  People at the shows that we have played are there for the reason that they’ve heard that everybody was in Swiz.  They’re really interested but don’t know what to make of it.  A few times, we’ve played a Swiz song, and then they all have this sigh of relief.  I don’t know, it’s like…it’s impossible to really be-

Dave:  All we have is a seven inch out-

Alex:  We’re trying to get used to how we feel about it together.

Shawn:  Things are a little bit different.  The sound, I guess, the attitude that people have nowadays, the mode of dress, everything.  It’s cool, it’s kind of refreshing and challenging at the same time.

Dave:  It’s really funny, because everybody that we see now at the shows we play are all the same age that we were when we were playing.  It’s like this constant same age youth circuit; it’s almost like a window of age that’s being repeated.  I would have thought that we’d see a lot more people that we knew.  Most of those people that are still around are in bands.  It seems like you’ve got a constant replenishing of younger and younger people coming up through the ranks.  It seems like once you reach a certain age, I think that people do get different interests and kind of move along.  It’s like this little window of fifteen to twenty-five.  Maybe it’s even smaller, but it’s constantly replenished.

What’s kept you guys into it for this long?

Jason:  Well, besides the fact that I really love playing guitar…  After Swiz, for me, it was kind of draining, and I felt kind of dead to doing it, and that’s when I started moving into other stuff, like graphic design.  And you always think of that as an enjoyable thing, you never put down your instrument, you keep playing it.  And all of a sudden, you realize that you’re writing stuff.

Jason:  That’s kind of what keeps you in it, the fact that you want to play.

Shawn:  I’d have to say the same-the energy and the release.  This is definitely the most accessible thing for anyone, whether they’re fifteen or thirty years old.  They play music and say what the fuck’s on their mind.  I started missing it and getting hungry for that kind of thing.  I had all this shit building up inside of me, and I needed to tell somebody about it. I wanted to work with the best, so…

Jason:  The best thing about this band is that it works in such an easy fashion.  We all started playing together again because it was easy for us all to hang out together; we have known each other for so long.  The songs came so easy to write; we’d just get in a room and write songs.  It’s not a big deal.  And then Jade Tree came along and said, “Yeah, we’ll put this out”.  Every step of the way there hasn’t been a lot of stress about it.  It doesn’t even feel like “Fuck, why didn’t we do this four years ago?”  It feels right.  We wouldn’t have been able to work together in this fashion, for whatever reason, [at that point] in our lives.

Alex:  I think that we reached a point where we scarcely would have believed that we would have been at a year ago.  For a long time, it was almost a joke, like “Yeah, do you want to get together and practice next week?”  And we never got together.  I was really impressed by the way that these guys pulled together in a month or so.  And as Jason was saying, it does come from a really strong desire to do it, so I don’t know if they even regard it as work.  It’s just been great watching everyone put a lot of energy into it, but in a purely enjoyable way.

Dave:  And then, on the other hand, when you get on a bill with Texas is the Reason and the Promise Ring, you don’t even have to worry about people showing up.  People have been like, “Oh sure, you guys:  play shows”.  It’s great.

Jason:  Since Swiz broke up, that band’s popularity peaked.  It peaked long after the band was gone.  It seems like people got interested way after the fact.  We acknowledge that people are coming out to see what the guys from Swiz are doing.  That’s not a problem, because we’re not in the least bit ashamed of what we’re doing.  We totally enjoy it, we’re totally proud of what we’re doing.

What else, besides the full-length, do you guys have planned for this year?

Jason:  Bluetip is going to find a new drummer.  Then we’re just going to sit around and make plans…

Dave:  That would be cool.

Jason:  There’s a lot of logistics, as far as what we can do, but it’s something that we’d like to do at some point.

Shawn:  We’re just kind of shooting off the hip.

Jason:  Right now, things are going pretty smooth, and we want to keep it that way.  We all have a good time playing together, and there’s no sense in trying to-

Shawn:  No worries, bra, no worries-:

Jason:  Couldn’t have said it better myself-

I guess that’s all-do you guys have anything to say in closing?

Alex:  Thanks a lot for the interview.